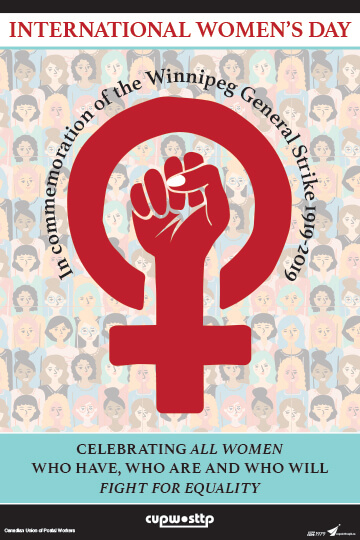 In 1919, thousands of demobilized soldiers are returning home after the First World War, while the factories producing for war industries are shutting down. Unemployment is skyrocketing and employers are using the sudden surge in the size of the labour pool to keep wages down.

On May 1, 1919, the various unions representing Winnipeg's metal and building trade workers go on strike for the right to form an umbrella union, and therefore gain stronger collective bargaining rights.

Two weeks later, led by the female telephone operators, labour leaders from other unions propose a general strike in solidarity with the metal and building workers, and roughly 30, 000 workers walk off the job. About 10 percent of them are women, who come mostly from commercial bakeries, confectioners and garment manufacturers. These women have their own issues – most notably, equal pay for equal work.

While there have been great victories for women workers over the last one hundred years, today, women in the workforce are often paid less than their male colleagues for doing the exact same work. This was true at Canada Post until very recently.

Last year, Rural and Suburban Mail Carriers (RSMC), nearly two-thirds of whom are women, won a long battle with Canada Post for pay equity, when an arbitrator ruled that RSMCs did work of equal value to letter carriers and that a wage gap existed. At the time, RSMCs earned about 28 percent less per hour than letter carriers, the majority of whom are male.

In January 2019, after many years of struggle, RSMCs saw the results of their hard work in the most tangible way –an increase in their paycheck.

While the pay equity decision was a major step forward for women, the fight is not over until we have achieved full equality for women workers. We have put these issues front and centre in collective bargaining and we will not stop until we achieve equality for everyone!

This year, on International Women’s Day, we stand with all our sisters, and vow to continue the fight, just as they did in Winnipeg in 1919, until we have equality for all.