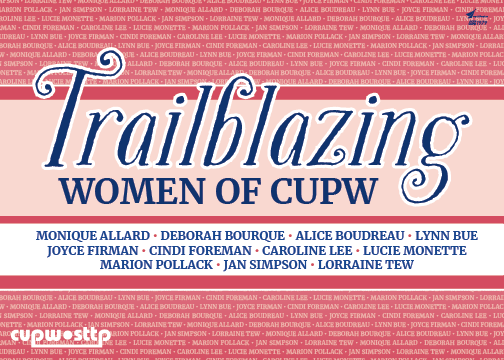 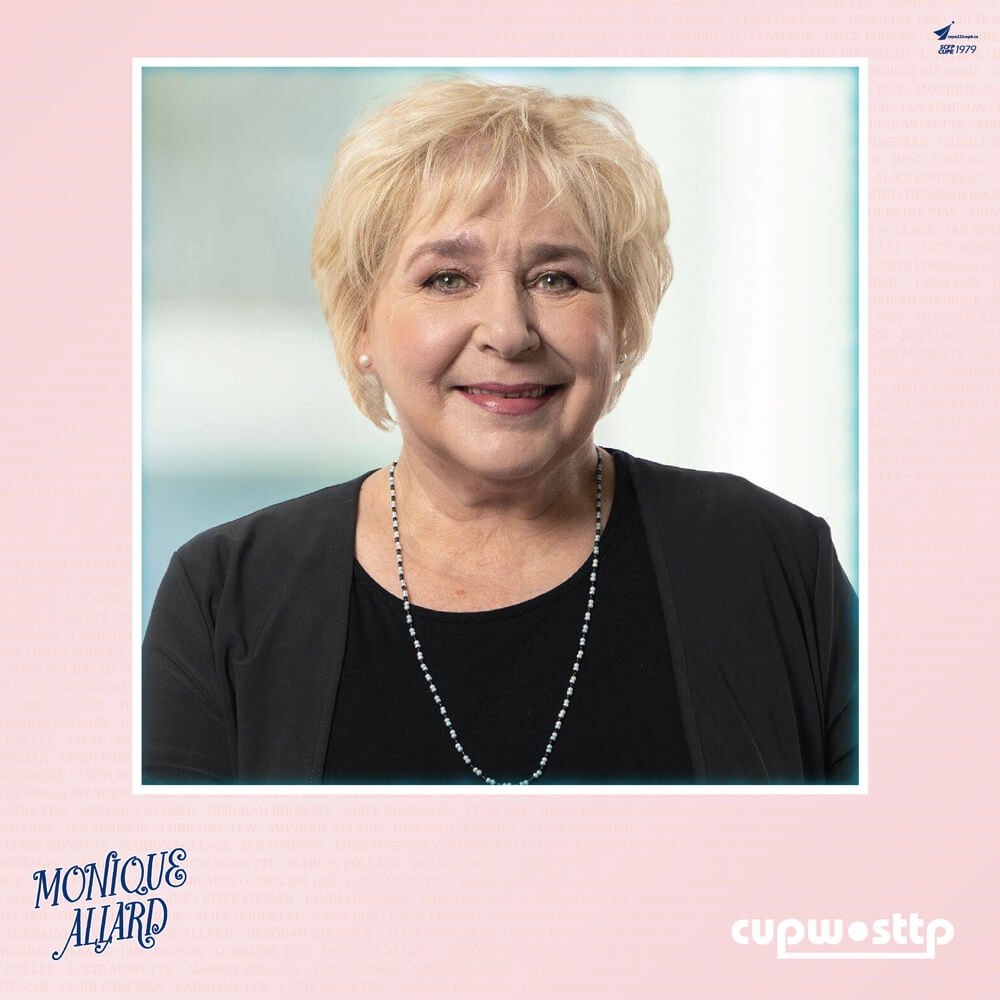 First woman elected Regional Education and Organization Officer in Quebec, Monique Allard was involved in her union from 1975 until her retirement, in 2008.

Her involvement was diversified: shop steward, 3rd vice-president, campaign to organize RSMCs, training, organizing drives, first CUPW Women’s Committee for the Quebec region and publication of Vision-Elle. She contributed to the deconstruction of prejudices and stereotypes in the workplace and in the Union.

Now retired from the post office, she’s still fighting to promote the interests of all workers. 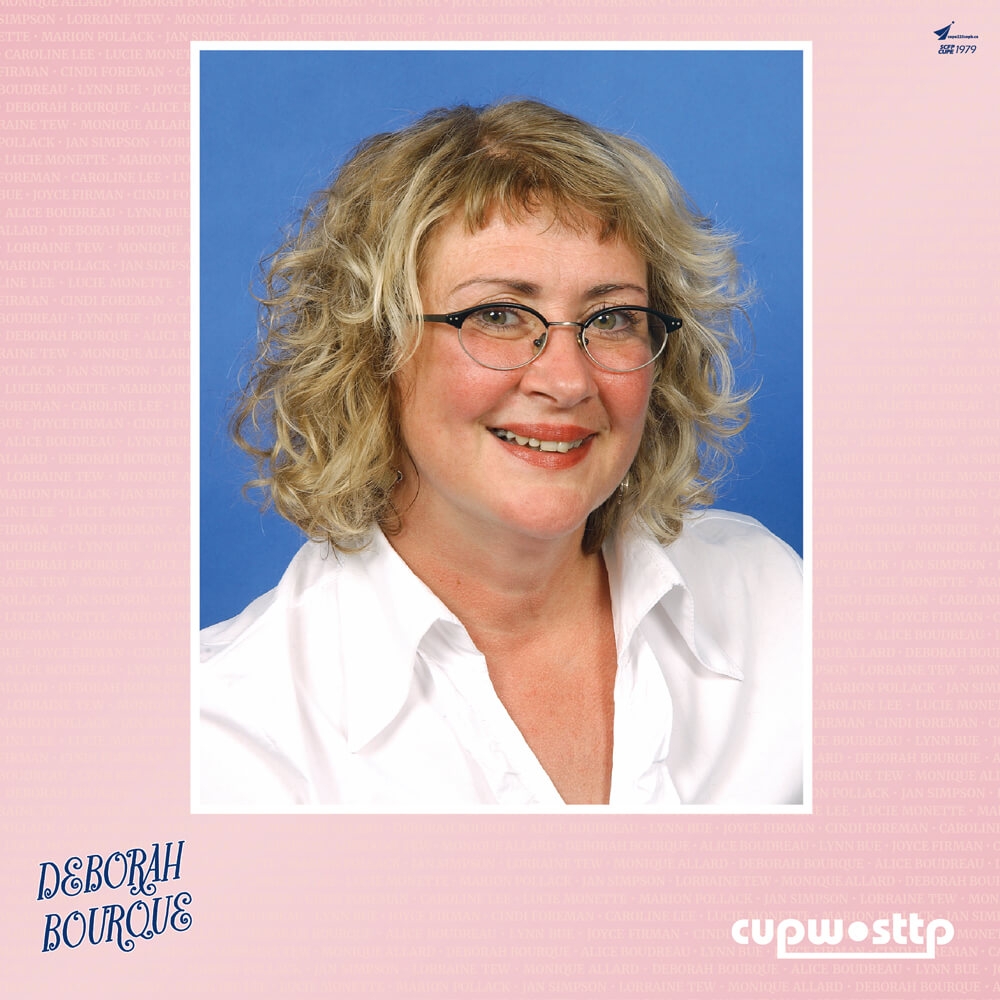 Originally from the CUPW Fundy local, she later moved on from National office to a position with the Hospital Employees’ Union. Sister Bourque’s activism continues in her retirement. 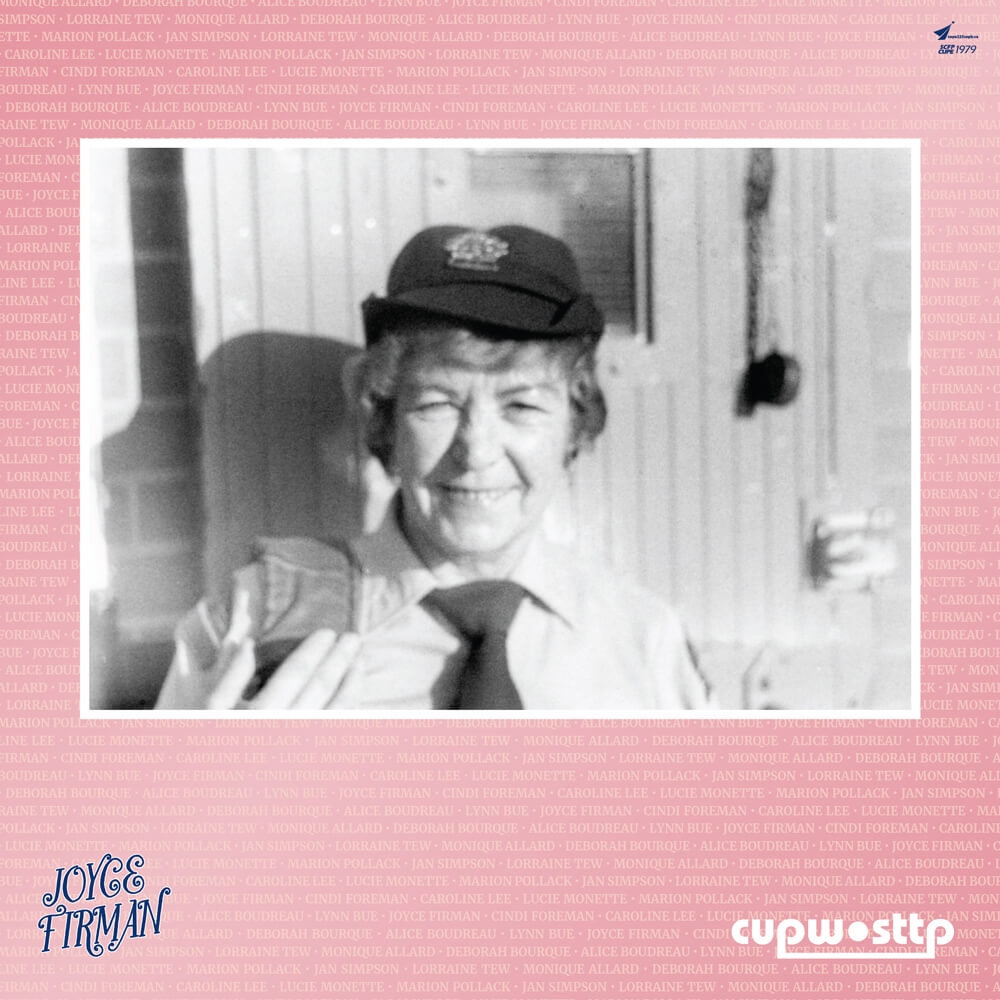 One of the first female letter carriers in Ontario, Joyce was hired in 1967 at age 47. It made news at the time that Canada Post had hired a woman as a letter carrier, and she had to overcome resistance, but soon was elected Secretary of her Local.

She was active in CUPW for the next eighteen years. Joyce passed in 2015. Her family is working to have her career commemorated. We’re celebrating her trailblazing work and activism with a mock stamp on outgoing mail from CUPW National office for the rest of this month. 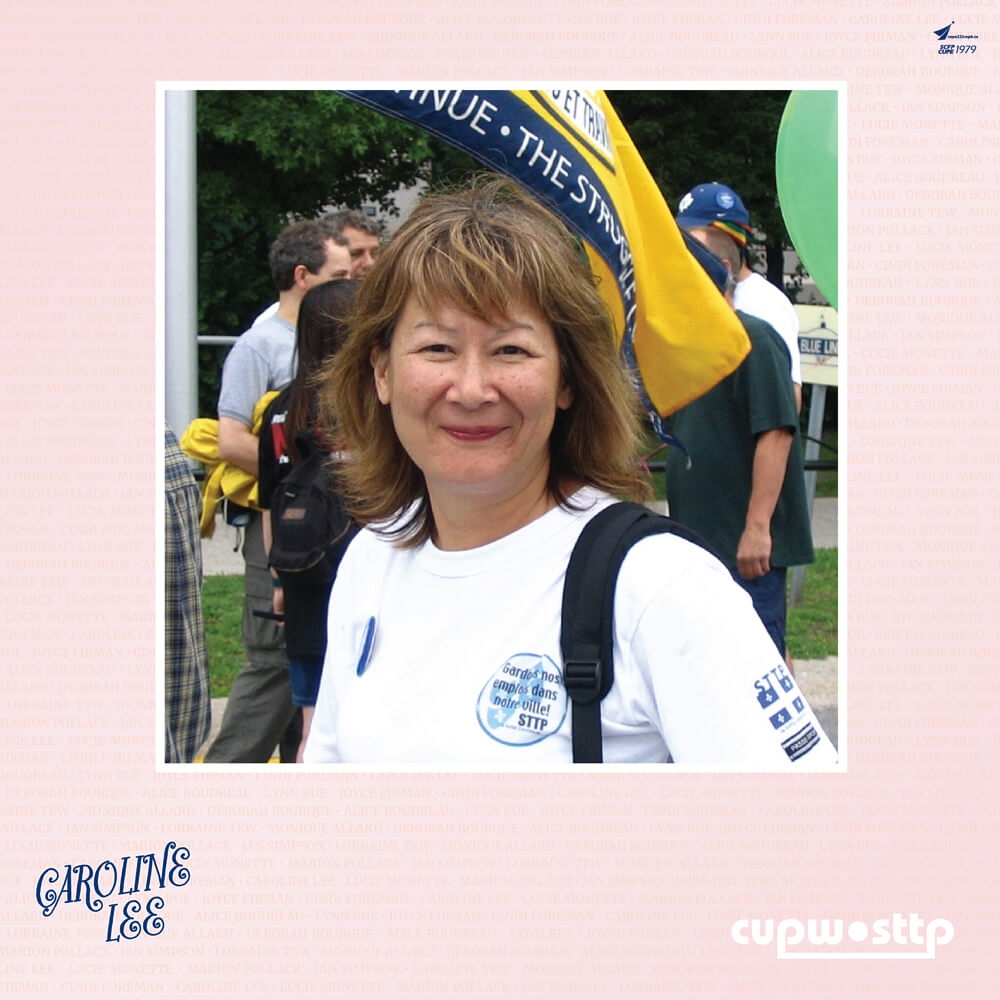 Caroline Lee was the first woman to be elected to the National Executive Committee. She helped develop the union’s education department over the years she was at national office, advised our national negotiating committee, worked with the National Human Rights Committee, and served as National Secretary-Treasurer.

She confronted racism and sexism in her efforts to improve equity for women in the workplace at a time when women predominated in the part-time workforce and needed the advocacy of Caroline and others to increase their options to move into full-time work. 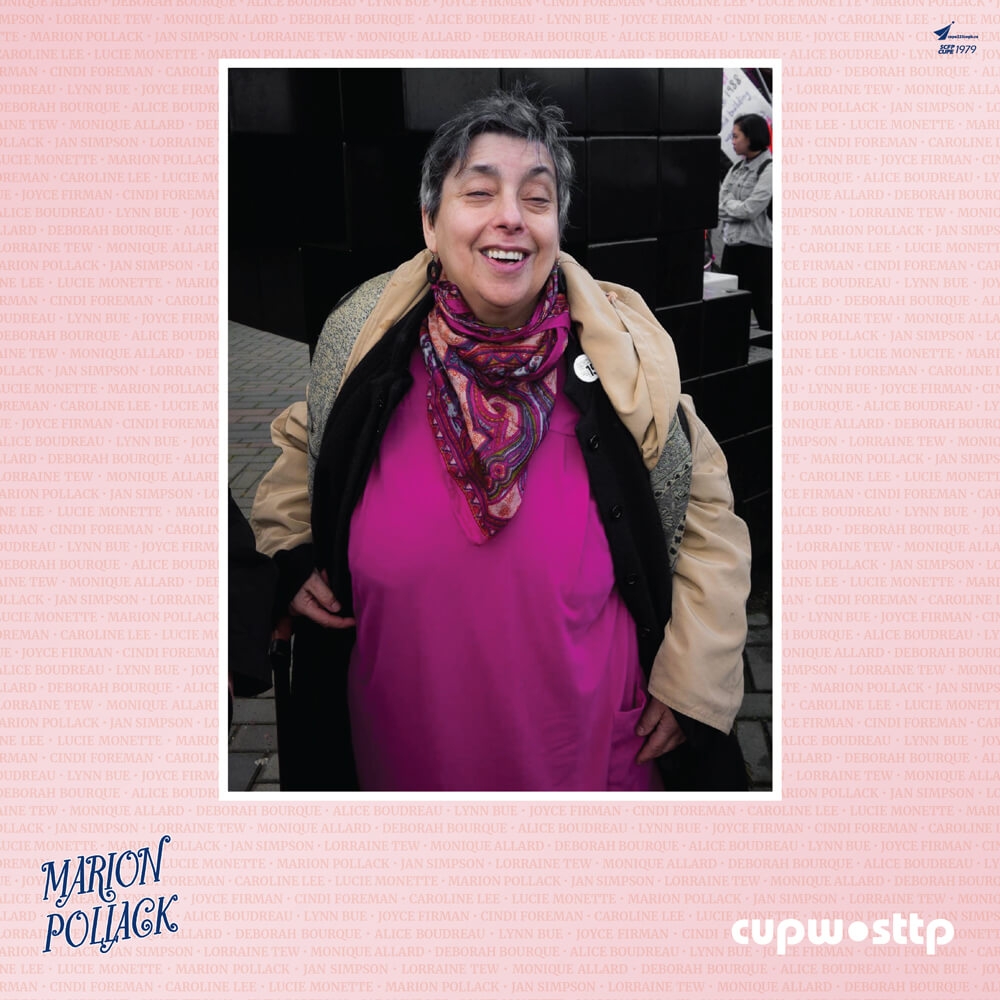 As a member of the Vancouver Local she became a Shop Steward and along with other sisters created the first Vancouver Women’s Committee, connecting union women across Canada.

She worked as a mentor, provided support and encouraged other women to get active. She advocated to push the labour movement and the government on issues of sexual harassment, violence against women and reproductive rights for women. She says she could not have done this work without a group of feminists inside and outside of the union.

“Standing up is hard but it is worth it and it needs to be done and you won't regret it.” – Marion Pollack, February 2020. 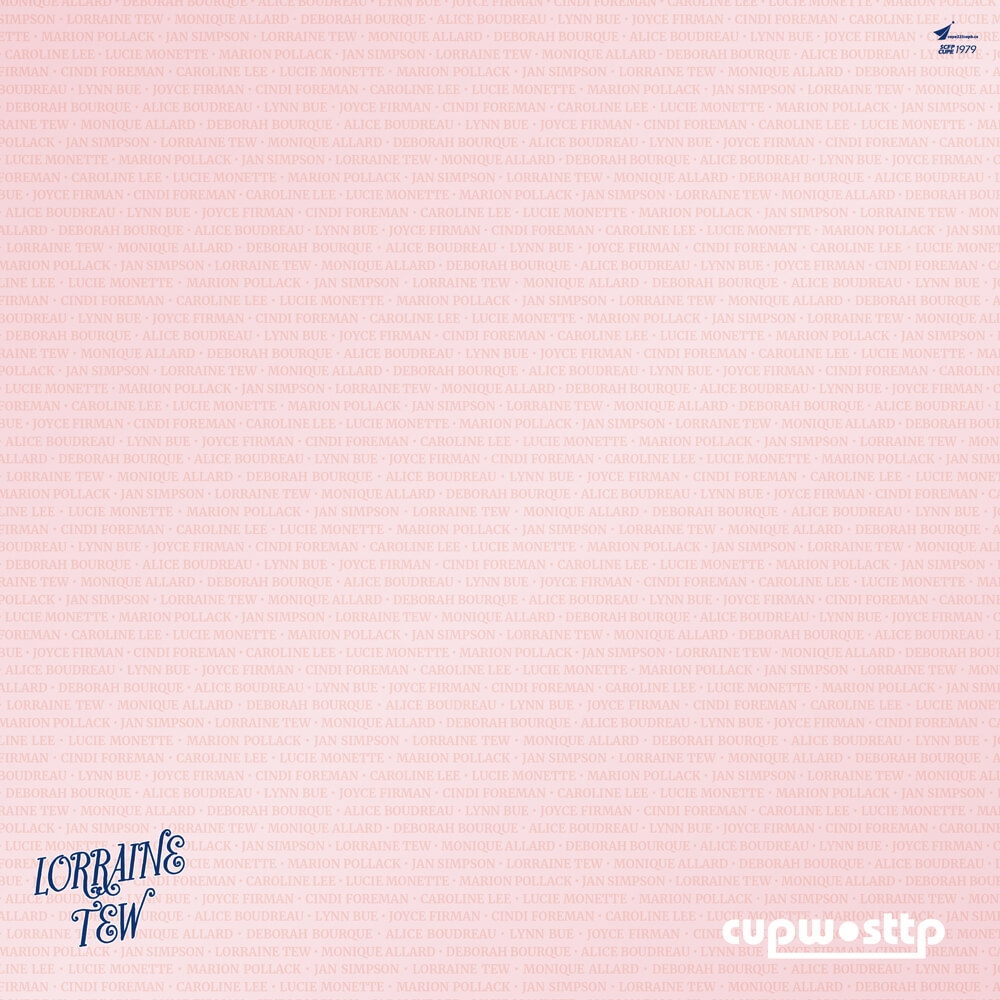 In 1986 Lorraine Tew was the first woman appointed to a LCUC Negotiating Committee. As a multiple term LCUC Burlington Local President, she was a strong voice on the work floor.

Through her involvement in Women’s Committees she was an advocate for women in the Union.  Loraine never hesitated to give encouragement to a new sister, or anyone for that matter. She was always modest, knowledgeable, respected and strong – qualities that inspire others to become involved in the Union. 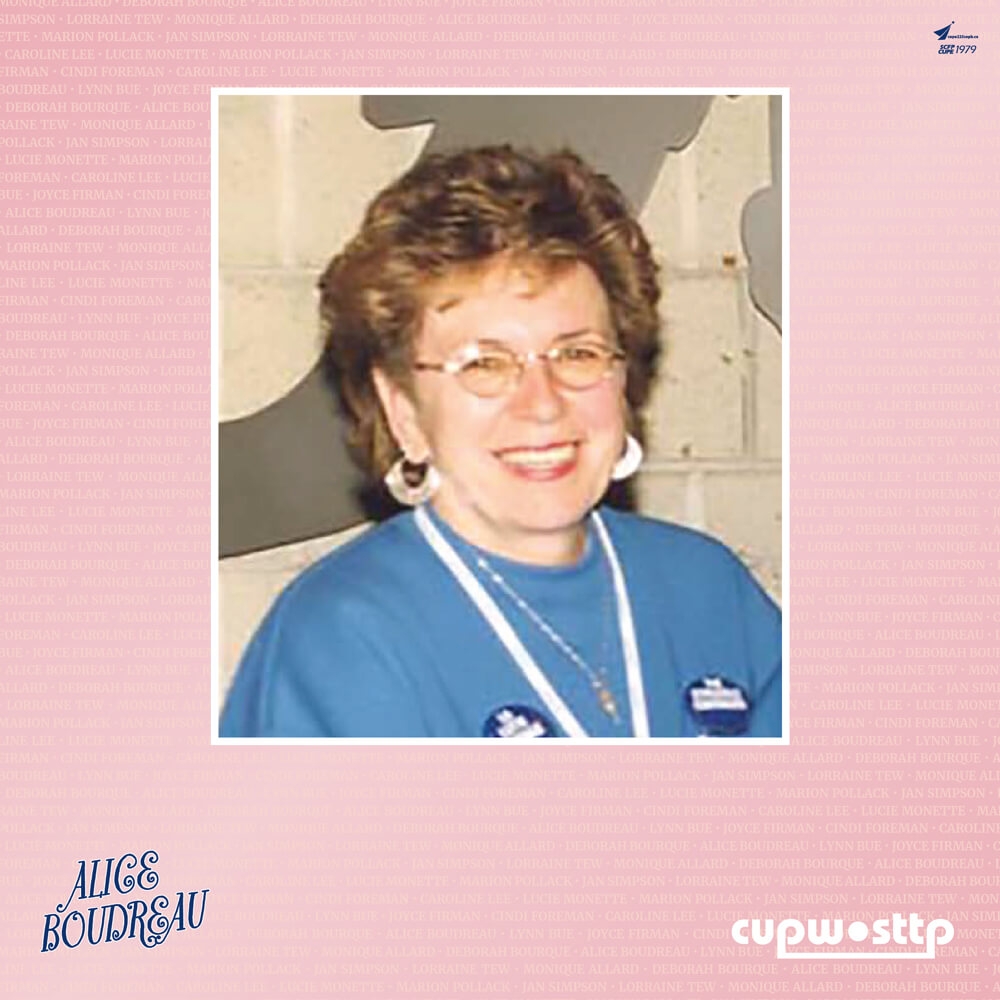 Alice began her career as a contracted courier, buying a contract for $300 in June of 1976. Over the years every aspect of the job deteriorated.

An opportunity arose to attend the founding meeting of ORRMC in 1996, and that led Alice to be asked to attend an AGM in Toronto in 1998. Alice attended in secret, fearing to lose her job if discovered by CPC. Shy, fearful, not knowing what to, she walked into that meeting and never looked back.

Fueled by this realization, and her search for justice, Alice led the way as National President and spokesperson for ORRMC, CUPW Regional Rep CUPW, activist lobbying Parliament. When the RSMCs signed with CUPW in 2002, she joined the National Office in Ottawa, and helped spearhead the 2003 collective agreement for RSMC’s.

20 years of persistence by Alice, with the Union’s help, brought RSMCs into CUPW. 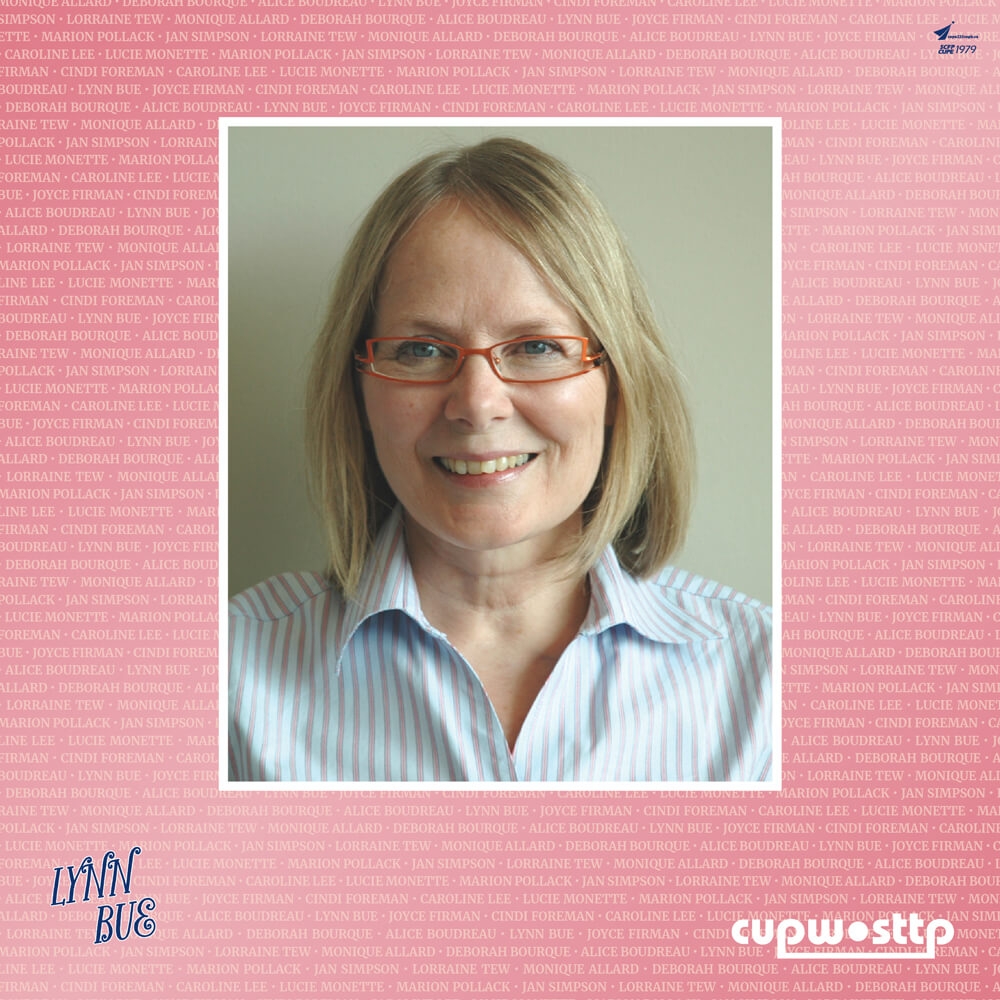 In 1999, Lynn Bue was the first woman elected CUPW National 1st Vice-President. She also served on the negotiating committee for the Urban collective agreement for several rounds of bargaining, including as chief negotiator.

Lynn was a Letter Carrier and LCUC member in 1976 and fought for many women’s rights in a male dominated job. Lynn and other women of LCUC had to put up with a lot of harassment and threats from their co-workers and never had any support from the supervisors.

With the support of the strong Edmonton women and men committed to changing things for women she got more involved in the union and found the union was a strong force to help the change. Lynn was instrumental in the start of the women’s committee first in LCUC and later CUPW, as well as a part in the first Human Rights committee. 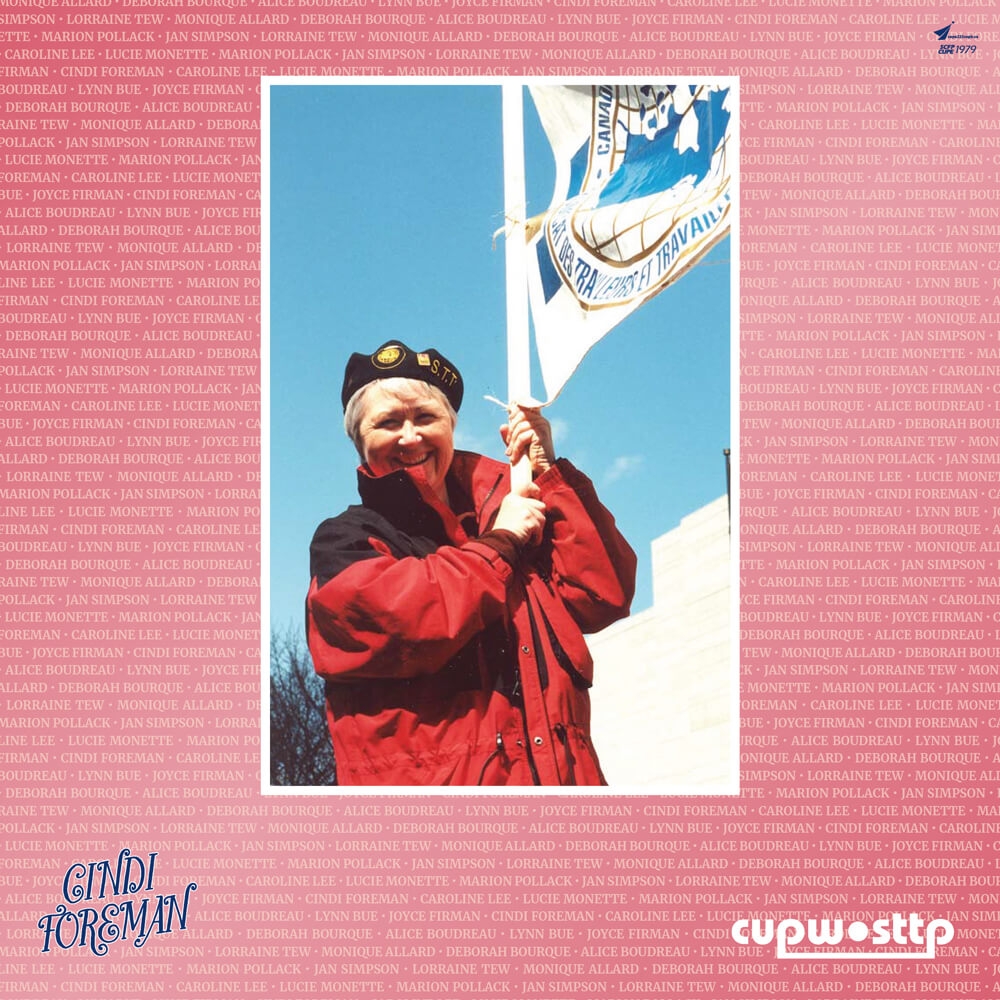 In 1981 Cindi was the first woman PO5 hired at the Toronto Airport  AMF. She transferred to Sudbury in 1989. She became a shop steward then elected as the Local 612 Vice President responsible for union organizing and education.

From 2002 to 2011, Cindi was elected as a CUPW National Union Representative and from 2011 to retirement in July 2015, she was elected as the CUPW 2nd National Vice President – responsible for education, human rights, women’s issues and child care.

Cindi was a femtor to Sisters and union activists.  She recognized her privilege and assured inclusivity. 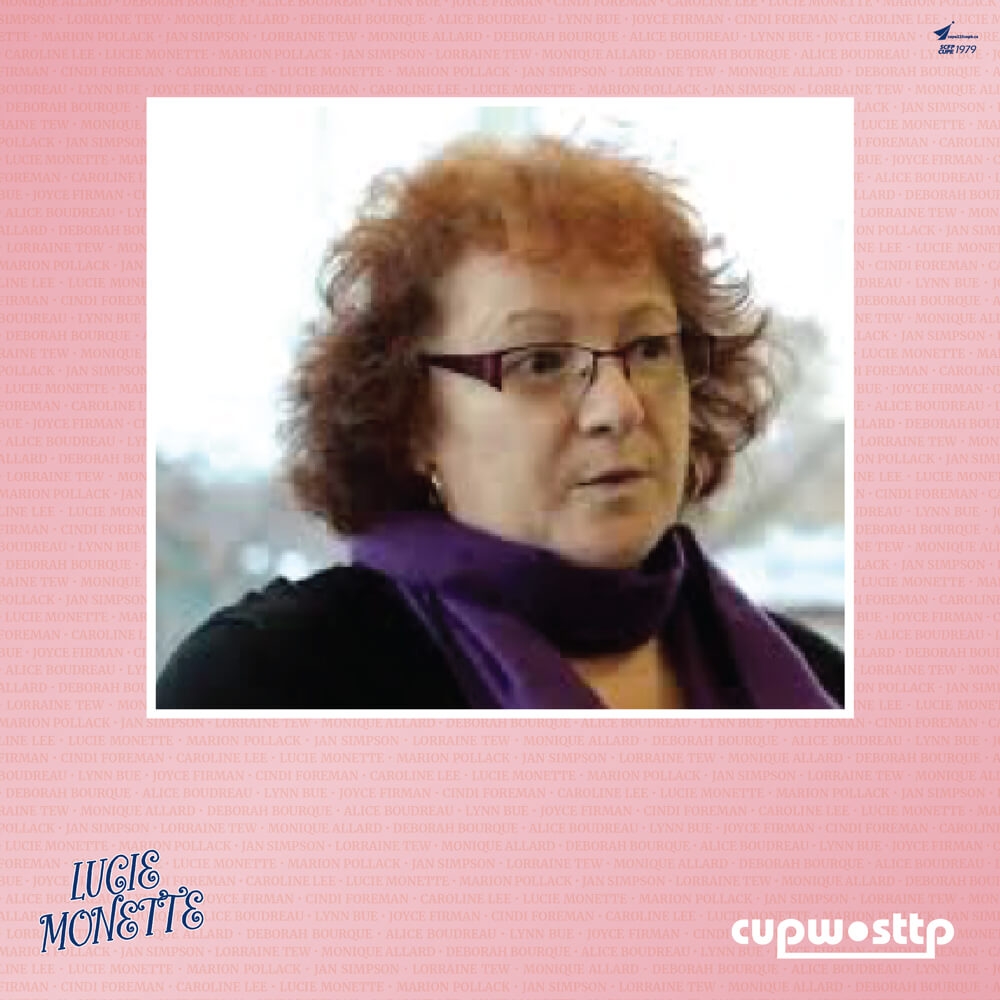 With her outstanding leadership skills, she succeeded in spreading the desire to get involved to many Sisters. A true pioneer, she was part of the first Montreal Women’s Committee and called for specific training for women.

She paved the way and allowed us to increase our confidence, to overcome our fear of public speaking and to take on leadership roles. By making all of her Sisters feel important regardless of their place in the Union, Lucie Monette is and always will be an inspiration to the women in the Montreal region. 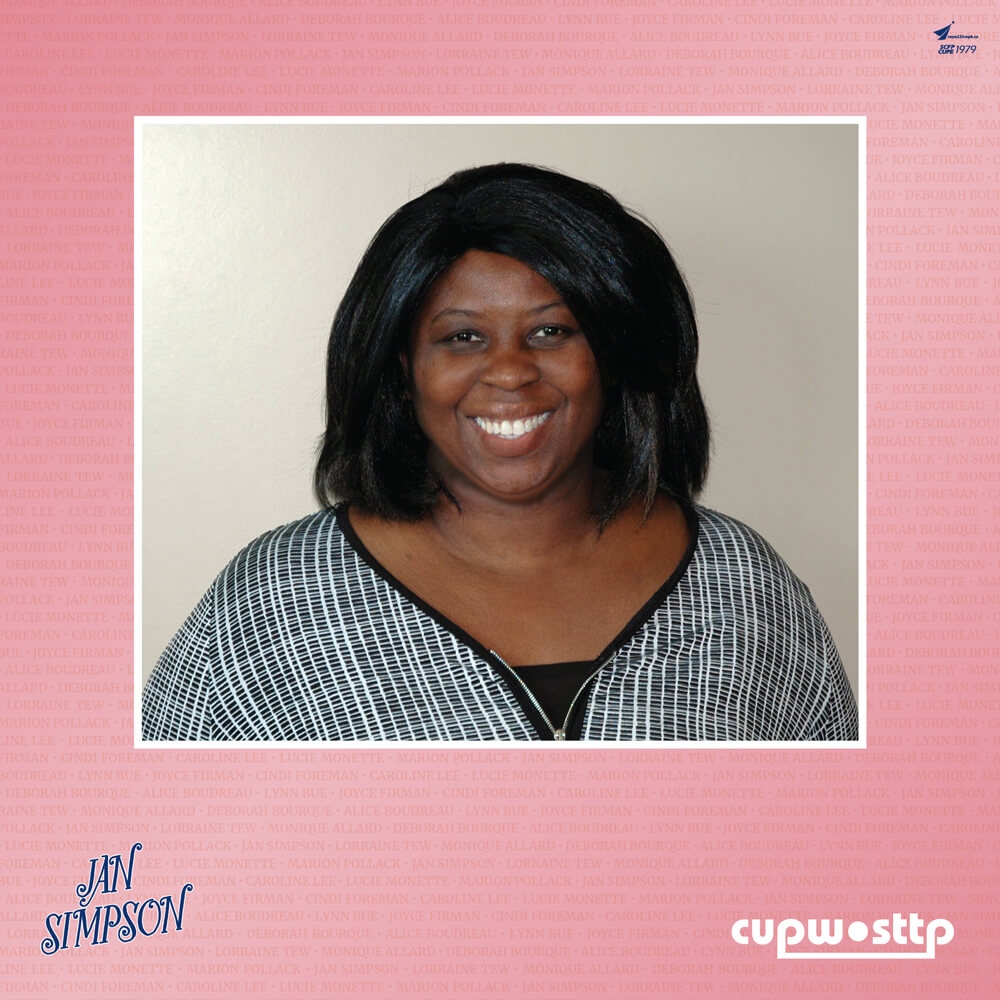 Sister Jan Simpson has and continues to be an inspiration to those of us at CUPW through her work promoting women, workers of colour, and indigenous people. Jan started her journey at CUPW in Toronto as a group 1 worker. From there she transferred to the Scarborough Local where she began to use her voice to protect the rights of the working class.